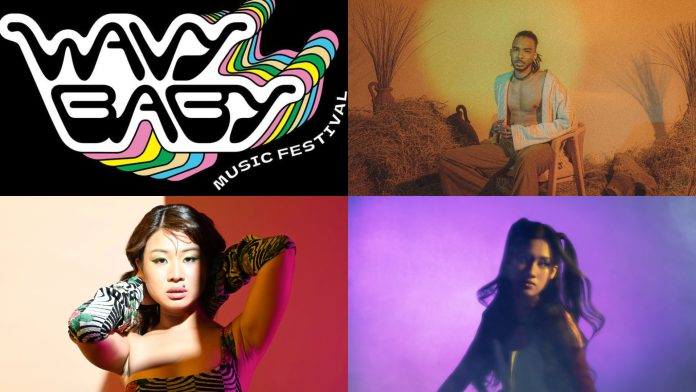 Everybody is definitely hyped up for the upcoming Wavy Baby Music Festival. With an elite lineup of musical artists, festival goers cannot wait to vibe and have fun in the Philippines’ biggest music festival yet.

But wait, there’s more- different local artists are also going to take part in the festival as they share their sick beats and amazing music to everyone.

Sugbo PH had the awesome opportunity to interview three proud Bisaya artists that are ready to take on the Wavy Baby stage and the international scene.

Careless Music artists Jolianne, Massiah, and Augustwahh will be taking over the Wavy Baby stage with their own twist and ignite the proud hearts of the Bisaya people. As they grow with Careless Music, these artists are sure to elevate the notion that Bisaya people are total performers.

Let’s get to know Jolianne, Massiah, and Augustwahh and their music journey.

You’ve heard people say that everyone from Cebu can sing, and this girl brings that to a whole new level.

Meet Cebu’s pride, Jolianne Salvado who was born and raised in the Queen City of the South. This sweet girl is a monster on stage and is elevating her career internationally. She has been singing ever since she was young and her singing career started when she auditioned for the voice kids when she was 11 years old.

During the interview, Jolianne told Sugbo PH that her musical influences are Mariah Carey and Celine Dion. Musical talent and singing definitely runs in the family as she also mentioned that her mom is also a singer. The artist also looks up to Ariana Grande as she considers herself a ‘pop girl at heart’.

The young artists started opening for Cebu concerts. However, her projects were shelved when the pandemic struck but that did not stop her from dominating the music scene. She released all her songs during the pandemic, and people started noticing her music. One thing led to another; Careless Music discovered and signed her.

Jolianne was even included in Blackpink Lisa’s “Dope AF’ spotify playlist. The famous Kpop artist included Jolianne’s ‘Sublime; in the playlist, a song that highlights her amazing vocals.

According to Jolianne, she feels happy to represent Cebu and she sees it as an exciting challenge.

Proudly from Dumaguete, Massiah is taking over the rap scene of the Philippine music industry. With his sick beats and powerful rhythm, Massiah is definitely showcasing raw talent.

But before being one of Careless music’s artist, Massiah started of by creating rap when he was young. He started by actually making youtube beats. Suddenly, a friend of his invited him to perform in Mango Avenue and thats how his first show kickstarted. Massiah met different local artists and from then on he continued writing and making music.

His hardwork definitely paid off as Careless discovered him in 2018. Since then he released mix tapes and was even one of the people who worked on Nadine Lustre’s album. He also did a song with James Reid entitled Experience.

There are not a lot of Dumaguete musical artists and Massiah feels happy to be one of the few who brings pride to his hometown. He is glad that he represents Bisaya artists as well. He does feel pressure but as he enthusiastically said, “We just gotta do it!”.

Massiah’s passion for his music and craft is very evident as to how he talks about being an artist and you can definitely see how excited he is to elevate the music scene.

Hailing from General Santos City, Augustwahh is Careless Music’s newest artist. The artist is laid back and chill, but when it comes to her performances? She definitely sets the stage ablaze.

Augustwahh’s musical journey started when she was a kid. According to her, she was discovered by her father. Music has become a huge part of her life as her dad decided to make a music room in their house when she was young. Every day after school, she would practice songs.

Her music career elevated after moving to Manila for college. Augustwahh chose to take up a music program in Benilde and despite it being a rushed decision, she started getting into music even more as she joined bands during her college days.

Just like many artists, Augustwahh experienced down moments. The artist decided to quit music and did it for a year. But her love for music did not let her just sit and quit totally, she was able to bounce back as she realized that she really did like to make music and it is the love of her life.

She turned her thoughts into poems, and the poems turned into songs with the right melody and beat. One thing led to another, Augustwahh’s musical career kicked off, and she is now part of Careless Music.

Growing up, Augustwahh’s musical influences were from a variety of different artists just as Whitney Houston, Barbra Streisand, Lauren Hill, and Minnie Riperton.

Augustwahh feels so proud because she makes people from her hometown proud. She also said that it feels really cool to be one of the first musical artists from Gensan to make waves locally and internationally.

Ze Ocean and Samokan are just two of the many songs the artist released as she elevates the Filipino Music scene.

Jolianne, Massiah, and Augustwahh all have the same sentiments when it comes to being artists at Careless Music. The three of them are very much thankful to be surrounded by people who support each other.

As per Jolianne, she is very happy because she was able to make the right connections with Careless as she gets to work with creatives that have the same passion as her. Massiah also expressed how thankful he is because he gained so much perspective. And Augustwahh is also grateful for the sense of community they have at Careless. She also highlighted how people with different personalities, age range, and styles come together to see different perspectives that challenge artists in a good way.

Jolianne and Massiah hinted that they will perform unreleased songs and feature different tracks from their albums that will surely showcase the different phases of their music career. And, of course, get ready to dance, vibe, sing, and have fun with Augustwahh as she brings energy on stage and definitely pop off.

Bisaya na pud! Make sure to witness fire performances from Jolianne, Massiah, and Augustwahh as they proudly raise our flag and take over the stage, the Bisaya way.

To learn more about the Wavy Baby Music Festival on January 13-14, including the ticket prices and where to buy them, check out our other article here.