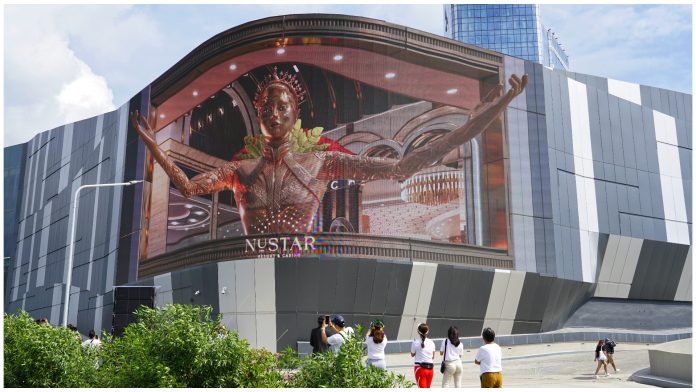 LOOK: 3D LED Billboard in Cebu City is the Philippines’ only ‘Jumbotron’

NUSTAR Resort and Casino’s “Island of New Celebrations” is launching the country’s first “jumbotron”- currently the biggest 3D LED billboard and the only one in the Visayas and Mindanao.

Measuring 620 square meters, NuSTAR’s 3D LED billboard is expected to be captivating, iconic, entertaining, and adventurous. To effectively deliver on its promise of being the ultimate leisure and entertainment destination in the region, NUSTAR is taking on another feat with the launching of its 3D LED billboard just in time for the grand return of the Sinulog.

The New Star of the Sinulog

As the “Island of New Celebrations” and the new star of the Sinulog festivities, NUSTAR Resort and Casino is adding another feather in its cap with the launch of its 3D LED billboard. With this technology being as iconic as the brand and the Sinulog, NUSTAR is all set to celebrate the grandest and most captivating festival in the Philippines.

After a three-year hiatus, the Sinulog marks its return this year with a full-scale celebration that is still anchored in faith and gratitude. With the events and activities leading up to Sinulog Sunday on January 15, 2023, Cebu’s rich and vibrant culture and heritage take center stage, and NUSTAR is proud to be one with the island province in commemorating this fete.

Combining billboard advertising and 3D technology on massive LED screens, 3D billboards require precise calculations and creativity. They can produce a three-dimensional visual of just about anything, from a movie trailer to a sneaker ad.

This technology works on the principle of “forced perspective,” which is a technique that uses an object’s scale and the audience’s vantage point to make something appear larger, smaller, nearer, or far from the spectator.

Through 3D technology, two images taken from different angles are combined and put into a single clip. That is how the viewers’ left and right eyes see the subject from different points, and the brain recognizes the visuals in three-dimensional depth. In order to achieve this illusion, curved displays with two faces are usually employed.

NUSTAR’s promotional campaigns, both static and digital, are regularly flashed on the 3D LED billboard to include hotel and food and beverage promotions to casino jackpots, tournaments, and raffle draws.

NUSTAR Resort and Casino is the flagship project of Universal Hotels and Resorts, Inc. (UHRI), a privately owned corporation of the Gokongwei Group focused primarily on gaming and integrated resort developments across the Philippines.

For more information, visit the resort’s website at www.nustar.ph or email the property at [email protected].