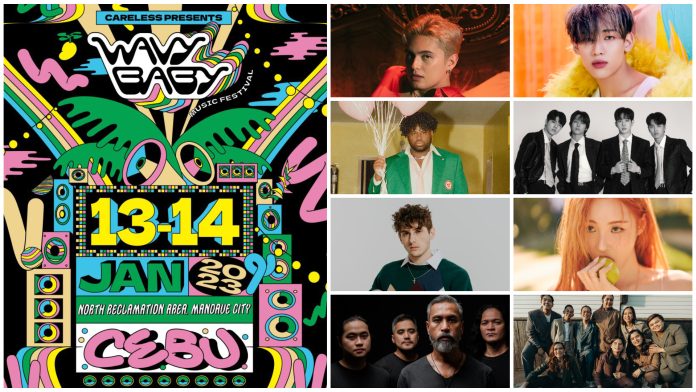 Careless’ Wavy Baby Music Festival 2023 in Cebu: All You Need To Know

The Sinulog fever is definitely on, as Cebu’s BIGGEST Music Festival just announced its jaw-dropping lineup.

Careless’ first-ever music festival, Wavy Baby, is bound to make the return of Sinulog one for the books.

Wavy Baby is a two-day music festival happening on January 13-14, 2023 at the North Reclamation Area in Mandaue City, Cebu with a lineup of over 20 artists recognized both locally and internationally.

We’re really excited to do Wavy Baby in Sinulog because it’s the biggest and most historic festival in the Philippines. We want to build a festival that brings the best of the Philippines and the world together to meet and celebrate life and culture, which is what Sinulog is all about.

He added: “We call it Wavy Baby because we want a wavy lifestyle and a wavy mindset. It also pays homage to Sinulog because the symbols are water and the baby Jesus, so it’s also a nod to that. We’re excited to be part of the Cebu family and build something special that hopefully, we can repeat year after year.”

The festival will be held at the North Reclamation Area in Mandaue City, Cebu — the vacant lot beside bai Hotel. There will be an Artist Lounge, a VVIP Lounge, a VIP Area in front of the stage, Cocktail Pods, Sponsor’s Hives, and a Market Pod.

The Cocktail Pod serves as an area for anyone to purchase drinks at the venue, while the Market Pod is designated for food and other merchandise that will be sold. The Sponsor’s Hive will be where Wavy Baby’s brand partners will have different booths that festival goers can visit.