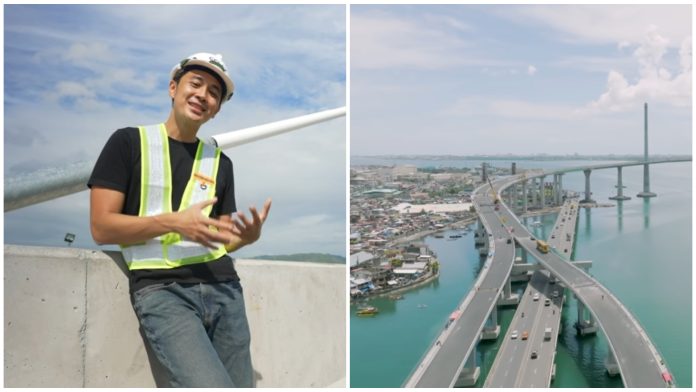 For those who have been consistently following Slater Young on his YouTube channel, topics on engineering, construction, design and even trivia on these topics are commonplace. However, Slater caused a stir on social media recently because of his vlog where he dropped a trivia about the Cebu Cordova Link Expressway (CCLEX), an 8.9-kilometer bridge that will link Cebu City to the municipality of Cordova.

The CCLEX has been the subject of fanfare mainly due to the fact that it will officially become the Philippines’ longest bridge when it opens to the public this month.

Opening to the public this month, the CCLEX has been highly anticipated and consistently made buzzes in social media as it will officially become the Philippines’ longest bridge. Secretary Mark Villar of Department of Public Works and Highways (DPWH) also took to the social media saying that the current administration’s “Build, Build, Build” program made the engineering feat possible – a misconception that Slater debunked in his video.

“A lot of people think that this is a government-built bridge, but this is actually built by Metro Pacific Tollways Corporation… so this is owned by a private company, and is built to last 100 years,”

THE CEBU-BASED ENGINEER AND CONTENT CREATOR EXPLAINED IN THE VIDEO’S 6:09 MARK.

Hazel Ann Cesa posted this remark from Slater Young, which eventually caught the attention of most netizens and ended up watching the entire vlog. “Slater Young is really out here using his influence to fight misinformation (and) stop the spread of fake news. RESPECT,” she captioned, the post pertaining Slater’s vlog.

It was also noted on her post that project was proposed way back in 2014 under a joint agreement and Public-Private-Partnership (PPP) Project with the local governments of Cebu City and the municipality of Cordova. This was two years before Duterte was elected as the president of the country in 2016, and three years before the current admin’s “Build, Build, Build” program was launched in April 2017.

In his vlog, Slater would go on to say that the “beautifully built bridge” as that a bridge of this scale existed on their home island, which is Cebu. He also added that the engineering feat made him even prouder as a Cebuano, also with the other Cebuanos who worked on the project until its eventual completion.

For those who don’t know, Slater Young is a former Pinoy Big Brother PBB housemate where he eventually won as the season’s Big Winner back in 2012. Young would now focus on creating YouTube content, putting his engineering background to good use by giving advice, tips, trivia and ideas anything about construction.