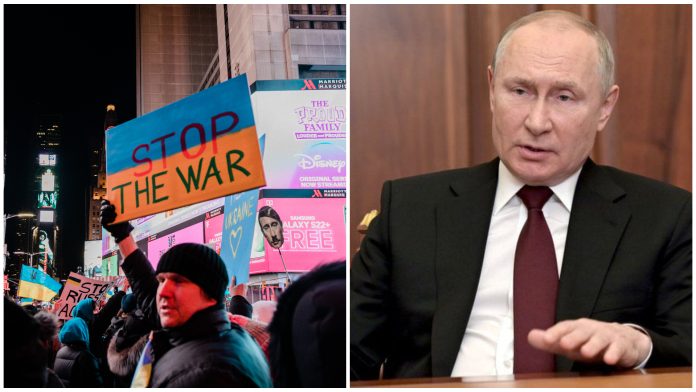 What does Putin want with Ukraine? The Russia-Ukraine Conflict Explained

You’ve most likely read it on the news; Russia’s Vladimir Putin has ordered an all-out invasion to Ukraine, its ex-Soviet neighbor. With military troops deployed, by both sides, tensions are high not just in Europe but all over the world as this could be the catalyst for a World War 3. But you might have been asking or wondering, why is Russia trying to invade Ukraine in the first place? Why is this happening? Here are some key details that you need to know about the Ukraine-Russia conflict.

For the past few months, the military buildup and brinkmanship by Russia on the borders of Ukraine has caused tensions and just recently, the former has finally decided to invade the latter’s capital. The act has been condemned by many countries and organizations all over the world, as it posts a threat of destabilization in Europe.

Despite diplomatic efforts with the hopes of staving off a possible Russian invasion, none were fruitful in defusing the tensions that have been brewing for the past few months. Since last year, Russia has been tightening its military grip around Ukraine. This includes the amassing of tens of thousands of soldiers, all complete with equipment and artillery.

With the years-long conflict between the former Soviet countries, the invasion culminated what experts are saying ‘the greatest security crisis in Europe since the Cold War’.

CURRENT SITUATION ON THE BORDER

On February 24, Thursday morning, President Vladimir Putin ordered the attacks on Ukraine, citing it as the start of a “special military operation”, where bloodshed was warned unless Ukrainian forces would oblige and lay down their arms.

More than 150,000 Russian troops have surrounded the country of Ukraine, which started months ago. Outside intelligence have speculated the main purpose of positioning troops this large in number at the borders of Ukraine where fast forward to now, multiple cities in Ukraine including its capital Kyiv have suffered from bombings and explosions.

With Moscow’s recent declaration of recognition for the Donetsk and Luhansk People’s Republics, this coincided with the attacks of Ukraine over the week, confirming the move as the pretext of its planned invasion. Located in eastern Ukraine’s Donbas region, Donetsk and Luhansk People’s Republics are self-proclaimed breakaway states located within the country. Putin’s recognition of the separatist and pro-Moscow states is opposite to Ukraine’s views of the states as ‘terrorist organizations.

Putin’s deployment of Russian troops to the region is seen a justification of a wider conflict that is being started with the recent attacks in Ukraine including its capital.

With this intensity, NATO or the North Atlantic Treaty Organization has ordered an increase of readiness of its rapid response force, with member countries deploying troops including planes and ships on standby.

Also called the North Atlantic Alliance, NATO is an intergovernmental alliance between 28 European countries and 2 North American countries which was established in 1949 during the aftermath of World War 2. With a main goal of establishing a system of collective security and mutual defense in response to an attack by any external party, NATO hopes that the tensions in Ukraine and Russia would simmer down.

While Ukraine is not a member of NATO, neighboring member countries in Eastern Europe such as Poland have readied its troops, planes and ships, all to be deployed in the region. Additionally, US President Joe Biden that they would also be deploying additional troops to Germany, with more troops to be redeployed in Eastern Europe. With all these movements, Biden still asserted that he won’t send troops to Ukraine itself, as the cause being it is not a NATO member.

Furthermore, the US also planned to declare new sanctions that aim to cut off certain strategic imports to Russia, serving as its ‘first tranche’ of measures in hurting two large institutions: Russia’s sovereign debt and the country’s elites as well as their family members. Biden, along with other European leaders have previously warned Russia of serious consequences if Putin would proceed with his plans of wider invasion.

HISTORY OF UKRAINE AND RUSSIA

The Soviet Union, or officially the Union of Soviet Socialist Republics (USSR) was a socialist state that spanned Eurasia from 1922 up to its eventual dissolution in 1991. Once a superpower, the ‘Soviet Empire’ was a coalition of European countries, with Moscow of Russia as its capital. Ukraine was also a member of the USSR.

According to the program, “the main goals and guidelines of the CPSU’s international policy” included ensuring favorable external conditions conducive to building communism in the Soviet Union; eliminating the threat of world war; disarmament; strengthening the “world socialist system”; developing “equal and friendly” relations with other countries.

Ukraine was a cornerstone of the Soviet Union until it aimed for independence in a democratic referendum in 1991, a move most experts said was death blow to the already weak USSR. With the eventual collapse of the Soviet Union, NATO in turn spread eastward with the goal of bringing in the Eastern European nations that once belonged to the Communist USSR. This included the former Soviet Baltic countries such as Estonia, Latvia and Lithuania and after a few years, NATO extended its offer to be a member to Ukraine.

WHAT DOES PUTIN WANT?

This sent off the wrong signals to Russia, as Putin himself sees NATO’s expansion as an existential threat. Ukraine joining the Western military alliance was a “hostile act”, a view Putin mentioned to his constituents via televised speech. Putin asserted that Ukraine is part of Russia – culturally, linguistically, and politically.

Putin claimed that the West had corrupted Ukraine, citing the influence as a “forced change of identity”. This address was done at the same time Putin recognized the independence of the Donetsk and Luhansk People’s Republics as well as casting the sovereignty of Ukraine.

Ukrainians, however, felt differently with this claim as for the past three decades, have sought to align more closely with organizations like the EU and NATO. The general Ukrainian citizens criticized Putin’s insistence, particularly that in recent polls, they now strongly favor membership of the US-led transatlantic military alliance.

The Minsk accords, hammered out in the Belarusian capital was made to end the bloodshed happening in eastern Ukraine for the past several years but to this date, it proved to be inefficient as key issues remain unsolved. This was further proven to be ineffective as Putin himself, weeks before the attack, mentioned that the accords “no longer exist”.

WHAT IS UKRAINE’s VIEW?

Before the attacks, current President Zelensky previously downplayed the danger of an all-out war with Russia, citing that if ever, Ukraine is prepared for any military aggression. These claims were opposite to Zelensky’s recent emotional televised speech, with martial law being declared.

“Russia began an attack on Ukraine today. Putin began war against Ukraine, against the entire democratic world. He wants to destroy my country, our country, everything we’ve been building, everything we are living for,” Zelensky said in a video message posted on his official Facebook page.

Since then, residents have fled the capital, some prepared for emergency evacuation kits, and some Ukrainian citizens have dedicated their previous weekends to become reservists.

With all these problems, Zelensky’s popularity among his constituents have significantly wavered, citing his failure to deliver on his promise of ending eastern Ukraine’s tension, cracking down on corruption and the judicial system, and also, a third wave of COVID-19 infections that affected the country’s economy.

Zelensky, who won the 2019 democratic elections via landslide victory, was a former comedian and actor where at point, he played a president on Ukrainian television, with some critics saying that this was a brutal baptism of fire into the real world of politics.