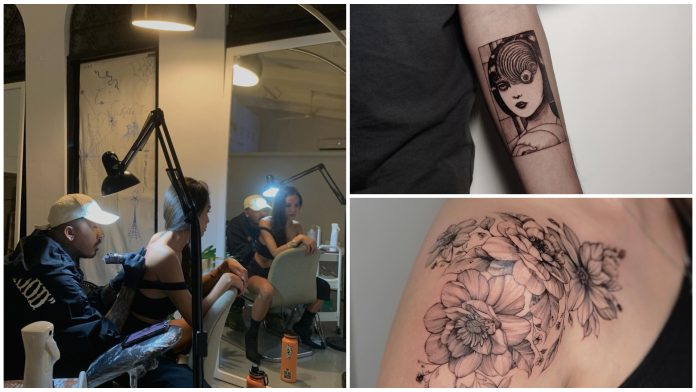 Getting a tattoo can be a special way to express oneself, or simply a way to be in with the trend. According to the Pew Research Center, they’re more popular than ever right now, with 40% of millennials saying they have at least one marking.

If you’re thinking about being inked, here are some of the well-known tattoo artists and shops in Cebu that you might want to visit, whether to mark the particular bond you have with your mother or simply because you can’t stop thinking about the delicate wrist tattoos you’ve seen on Instagram. Rates may start from ₱1000, depending on the design and colors involved.

Talaboc started his career in 2013 but it was not until 2016 that he decided to make tattooing his main source of income. He is known for his minimalist designs, dot works, and floral tattoos. This is because most of his clients are women who love minimalist designs like scripts, micro portraits, and small floral pieces.

On the other side of the story, Chow Abinales is the owner of 032 Tattoo, one of the greatest tattoo shops in the area. It has been offering consumers high-quality and secure ink jobs in the center of Cebu City since 2011. Although they excel at Japanese and portrait patterns, they can also accept other styles, such as minimalist tattoos.

In a sit-down interview at his tattoo parlor, Crols Tattoo, located at 66-A M.P. Yap Street, Cebu, Carlo said that getting a tattoo is a way to represent who you are. This statement held for him, as he started having a liking for tattoos after his first tattoo when he was in high school.

Once an Architecture student, he now runs Crol’s Tattoo for more than four years already. When it comes to intricate designs, Carlo is the one to turn to because of his incredible creativity and attention to detail.

His tattoo shop, Ronnie’s Tattoo, is also known to be the first tattoo shop in the Visayas. He specializes in freehand, realistic, portrait, and black and gray tattoo styles.

Redeemed Tattoo is a relatively new tattoo shop owned by tattoo artist Boots Brandon, who went a long way before he opened up the shop. He once struggled to discover his calling and direction in life, but today he owns and runs a tattoo parlor in the lifestyle mall.

He gave his business the name “Redeemed Tattoo” as a tribute to all the times he contemplated giving up and all the hardships he had to go through on a personal level to arrive at where he is now. Now, he has a team of over five tattoo artists and even plans to expand his brand.

Where to find: Crossroads, Banilad

In 2005, Needlepoint Tattoo Studio opened for business and started inking its way into the industry. After working as a traveling tattoo artist for a while, owner and senior tattoo artist Ralph San Ramon decided it was time to open the store of his dreams in Cebu City, where he was born and raised.

The studio began as a tiny shop that was run solely by Ralph and his wife Pearl as they divided their time between managing the business and attending college.

They also offer cosmetic tattooing through scalp micro-pigmentation in addition to tattooing artwork on the skin, giving balding patients the appearance of having thicker hair or stubble.

Also known as “Nante,” Renante is recognized for championing at the most prestigious tattoo convention in the country, DUTDUTAN, as well as others competing in various competitions. He works for Southern Tattoo, a tattoo shop found in the heart of downtown Cebu.

Since they employ one of Cebu’s top tattoo artists, who is recognized as one of the industry’s pillars of badass inking, their service is devoted and takes delight in producing the best tattoo for you.

Ian Cabrido is a professional Cebuano tattoo artist with extensive experience that stretches back to 1992. Since then, he has already worked with some international clients and has proven himself in many competitions, such as in the 2003 Fear No Art where he was the overall champion, and in the 2007 First Pinatikay National Competition, where he was also hailed as champion.

According to his several clients, his work is so defined and his use of colors turns every client’s tattoo into perfection. Because of that, he has continued to rise in popularity as one of Cebu’s most prominent tattoo artists. You can catch him in his studio, the Inkkin’ian Tattoo Studio.

Known for his preference for neo-traditional and oriental styles of tattooing, he has been immersed in the ways of the industry and has proved himself in many tattoo art competitions. Recently, his team bagged first place in Ink Paradise 2022 tattoo competition (Large Pre-made Category) in Camotes Island and 2nd place in the Liloan Inkfest 2022 (on-the-spot pro category).

Espinosa can be found in his tattoo shop, The Classick City Inks & Lifestyle in Lapu-Lapu City.