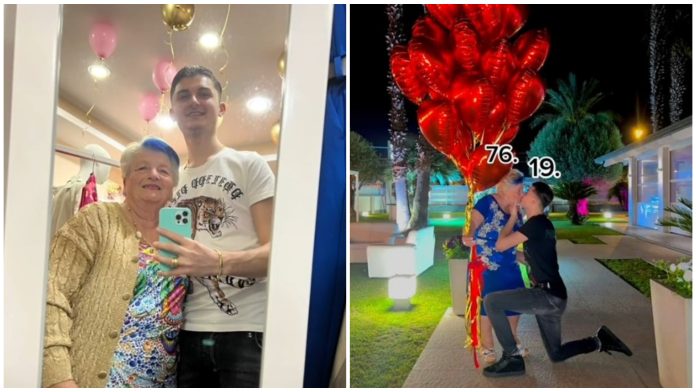 They say that at this day and age, true love is hard to get by. In this fast-paced world, a lot has jumped from a relationship to another, as quickly as they change clothes. Some would say that the “hookup culture” is very prevalent for this generation, but that doesn’t seem the case for one 19 year-old teen from Italy.

Giuseppe D’Anna, a 19 year-old teen from Italy admitted that he is now engaged with his 76 year-old “soulmate”. Via the popular video-sharing app, Tiktok, D’Anna posted a video showing asking his partner her hand for marriage. The heartfelt proposal swept the Internet and as of this writing, the Tiktok video has now more than 75 million views.

Posted last May 23, a video montage was posted as a Tiktok by D’Anna showing him and his now-fiancée (who he chose not to reveal her name yet to the public) sweet moments they shared. The montage included a photo of D’Anna kneeling in front of his partner while both were kissing, indicating that it was the moment the latter said “yes”. The video also included pictures of lavish gifts, including the presumably wedding ring, with a large diamond on it.

D’Anna captioned the video “la nostra promessa” which translates to “our promise”. Along with the caption is a green heart and the infinity symbol.

However great the news was, netizens all over Tiktok had mixed reactions regarding the news. Some commended the 19 year-old teen with his bravery declaring his love for someone much older than him, others have mentioned that the young man may have not been thinking things clearly and just infatuated. Some even said that it was all just a publicity stunt, that the account used “shock value” to gain likes and increase their following.

Prior to the proposal, Giuseppe D’Anna uses his Tiktok account by posting videos of him and his partner sharing sweet moments, doing Tiktok trends, eating food together, sharing quality time, and news clips where they were featured in local Italian news. The account has now 390.1k followers and a total of 12.9 million likes.