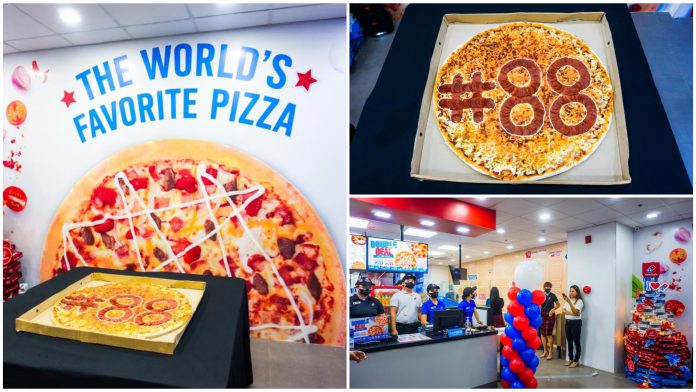 When we hear the word “pizza,” many Cebuanos come to think of a couple of pizza stores that have long established their reputation as high-quality pizzerias known for their delicious pizzas.

There is one pizzeria that is also very well-known in the world — Domino’s Pizza. They are known for their extensively curated menu while keeping in mind the traditional taste of a specific branch’s country along with an unwavering Italian feel.

In the past, Domino’s Pizza had no branch in Cebu but only in other parts of the Philippines. However, due to insistent public demand, the world’s favorite pizza store opened two branches in Cebu: (1) Pacific Mall in Mandaue Cebu and (2) Horizons 101 in Mango Avenue.

Domino’s Pizza is also set to open its 3rd branch at Cebu IT Park later this year.

Their newest branch is located in Pacific Mall, Mandaue City, an addition to the company’s 87-strong collection of branches in the city. This now makes it the 88th Domino’s Pizza store in the Philippines, which is set to be added with more branches for Cebu soon.

They serve a variety of flavors and dishes; not only pizza but also pasta, chicken dishes, bread, desserts, and refreshing drinks. One of their bestsellers, the American Bacon Cheeseburger, is something you should try out when coming to the place!

If you’re also looking for deals that will satisfy your cravings without breaking the bank, Domino’s Pizza has got your back. With their affordable menu and promos, such as its buy-one-take-one “Double Deal” starting at ₱569 for two 10-inch pizzas, you’re surely in for a treat!

So, what are your waiting for? Head on to their newest branch, located at Pacific Mall, across Red Ribbon, and beside Zubuchon. They are also available for delivery via Foodpanda, GrabFood, and its official app, Domino’s Pizza Philippines.