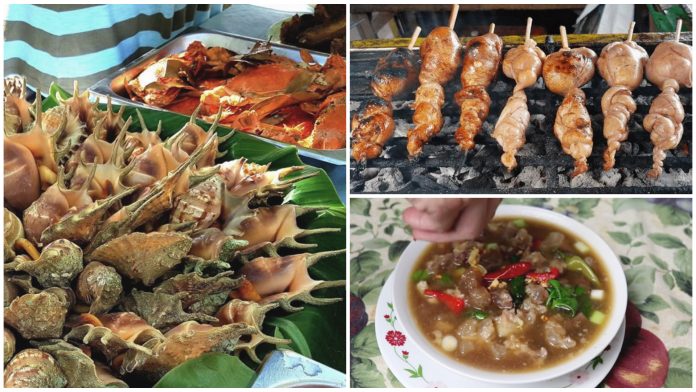 5 ‘Crazy’ Cebu Eats You Must Try

One way of traveling is by living like the locals, which means doing their daily rituals, eating their comfort foods, or simply living their life for a short period of time. Here in the Philippines, each region or even province has different food specialties that are uncommon for foreign or even Filipino visitors.

Along the corners of this country lie the exotic dishes that may not be pleasing to everyone, but were originally discovered and made by our locals. They could be in the form of a dish, soup, dessert, or street food, and all of them are uniquely ours and represent a part of our country’s culinary world and culture. With these exotic dishes being prominent and popular among travelers, they are becoming a staple every visitor (or even the locals) must try.

A lot of Filipino and foreign travelers love exploring new and exotic dishes when they visit certain places. From eating bugs, unusual animal parts, or uncommon seafood, they are going to try them all to get the full experience of being a local in the place that they traveled to.

Cebu is one of the places in the Philippines that offers a variety of exotic foods that are not only “unusual” but also really delicious, healthy, and some are even aphrodisiac.

From the numerous exotic dishes in Cebu, we’ve narrowed it down to 5 of the craziest eats that you must try in Cebu. These foods are unique, popular among the locals, quite tasty, surely surprising, and definitely exotic. If you are a food explorer, I can assure you that these dishes will give you the satisfaction of trying something new and fulfill your travel experience.

Saang (Lambis scorpius), also known as spider shells or scorpion conch, is a gastropod shellfish that is being sold as a skewered street food around Cebu. Street food vendors prepare this exotic food by boiling the shells, taking the meat inside, and skewing them on a stick.

With saang shellfish being very abundant in the oceans around Cebu, a lot of vendors took the opportunity to sell them after realizing that they have edible and delicious meat inside. Vendors sell Skewered Saang for around Php 25.00, and the price varies depending on the size. This street food is relatively new, especially for tourists from other countries or even for those who are from other cities and provinces in the Philippines.

At first, it would feel strange to try this food, but after probably trying one or two, one can already appreciate its delicious taste and interesting texture. Skewered Saang is best served with a vinegar dip or soy sauce dip filled with onions, garlic, and pepper, and this food can be eaten as an appetizer, snack, or side dish.

This street food is readily available around coastal towns, near fish ports, and also around the city proper of Cebu, where cart merchants sell it as well. Once you visit Cebu, never miss trying this “crazy” but tasty and unique street food. Skewered Saang is an original and very Filipino street food that any visitor should try to fully submerge in the Philippines’ culinary world.

A famous and unique skewered dish served in Bantayan Island, named Taguangkan, is a grilled chicken large intestine with undeveloped eggs, wrapped and twisted on a stick.

This exotic dish is called Taguangkan, which is from the words ‘tagu’ which translates to as ‘womb’, and ‘anak’ or eggs for chickens, meaning “an undeveloped egg from a chicken’s womb/ovary”. With the abundant supply of chicken and eggs from the numerous poultry farms around Bantayan Island, this dish has become a delicacy and exotic food that every visitor to the island must try.

The dish looks like a chicken leg with no bones, and tastes like a normal grilled unsalted egg. For a day of swimming and different island activities, this dish is a great source of protein so that your energy will remain high until the end of the day. The food may seem strange and foreign at first, but with its delicious taste and surely edible origin, one can surely eat and enjoy this exotic delicacy.

Once you pay a visit to Bantayan Island or other nearby islands, try Taguangkan, a crazy but very delicious dish that will seal your stay in the islands.

Tuslob Buwa is a popular street food around Pasil, Ermita and other parts of Cebu that every group of friends, family, or even strangers, enjoy and share around an eating table.

This street food became a staple in Cebu’s modern culture, to the point that even restaurants started serving this dish with their own twists and incorporations. This street food’s chief ingredients are pork liver and brain, which are sauteed with onions, garlic, chilies, and shrimp paste. Sometimes, they add shrimp meat and soy sauce for added flavor.

This dish has a greasy consistency. It is watery at first, and after being cooked, it changes into a thick, bubbly stew. “Tuslob Buwa” roughly translates into ‘dip in bubbles’ meaning you can dip a rice ball into the bubbly stew to enjoy this street food. Among vendors, they sell the rice wrapped around coconut or pandan leaves, called puso, for only Php 5.00 or more, and then allow the customers to eat them together while dipping them in the cooked bubbly stew. Tuslob Buwa is an original Filipino street food that every local and foreign visitor should try.

Bakasi is one of Cebu’s exotic foods that every local and foreign visitor should try. Bakasi is the Cebuano term for reef eels, and this exotic seafood is quite abundant in the coastal areas of Cordova, Cebu.

Bakasi is usually served in kinilaw or nilarang style, but some eateries cooked it by frying or grilling the eels. Their skin is slimy, they have white meat and a backbone that goes from their head down to their tip. Due to its appearance, especially when cooked with soup or served raw, not all people are brave enough to give this dish a try.

This exotic food is delicious, and once you try one eel, you will want to get more of it. For starters, trying the fried eel would be advisable because they don’t look too unpleasant, and you can easily eat the Bakasi, including its bones. After that, you can try the kinilaw-style or nilarang-cooked Bakasi to taste the seafood and fresh taste of the eels. Bakasi is even believed by the locals to be an aphrodisiac, giving them unexplainable body heat after eating the eels.

Bakasi is available at several carinderias around Cebu, and one of the most famous Bakasi eateries is Entoy’s Bakasihan, which is even featured in a popular Netflix series. You can get a taste of Bakasi for only Php 30.00 or more. This food may not be for everyone due to its unpleasant appearance, but if you are not a faint-hearted, this is definitely a must-try and a great way to explore Filipino dishes.

Lansiao is a commonly found Cebuano carinderia soup made from bull’s, or sometimes horse’s, testicles. The word lansiao is said to be from a Chinese dialect that literally translates to “dick”. This dish is also known as Soup No.5 in some areas of the country, and these perfectly boiled testicles with other tasty ingredients are popular as an aphrodisiac food among Cebu locals.

The nutty and earthy taste from the nether region of these animals, together with their gummy or rubbery texture, is a treat that every local and visitor enjoys and savors. Lansiao is usually cooked with pieces of meat, membrane, other internal organs of bulls, and, of course, the penis, and this soup is boiled for a long period of time to get the pieces soft and the soup quite tasty.

Lansiao is not for everyone, especially if they are aware of the main ingredient, but once tasted, at least the soup, they return for more. This exotic Cebuano dish is served at many carinderias around the city and province, and this is a popular dish that one should try when paying a visit to Cebu.