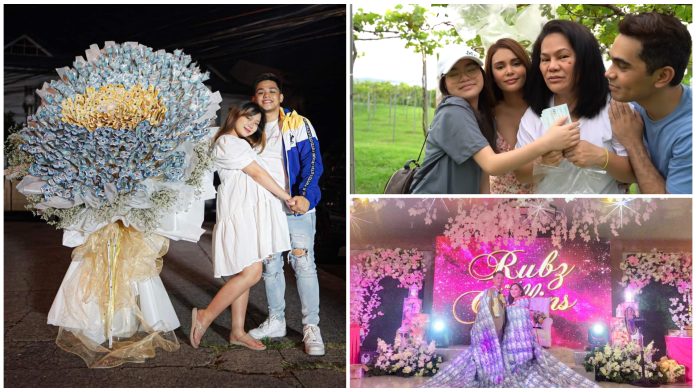 All of us certainly came up with different ideas on how to surprise our loved ones at some point in our lives. Be it through presents, quality time, or simply personal messages, we all have in mind to please our loved ones in our own ways. But the case is quite different for the following, as their means of gifting could literally make people scream ‘sanaol!’. Here are some over the top gifts that went viral on the Internet lately:

Weddings are surely intimate ceremonies, and one of the more memorable scenes is the gift-giving portion. Brides and grooms are traditionally gifted by godfathers/godmothers and other visitors but one bride caught the attention of the netizens when she gifted her husband a cash check worth 1 million pesos. The catch though is that the check is dated 2071 – 50 years later on their 50th wedding anniversary. To add more humor to the gimmick, she included one bottle of soy sauce or toyo.

On another wonderful story about weddings, a newly-wed couple received 1.6 million pesos in total during the ‘money dance’ portion of the wedding reception. The couple even donned the cape made up of thousand peso bills as well as sashes made of the same bills. “Basta daw taga Quezon Province galante daw sa Money Dance, Hindi naman ako naniniwala kasi 1.6M lang naman❤️” remarked the uploader of the viral photo, Edward Pascual.

Love is indeed in the air in this list as even though there’s no wedding involved in this item, a young guy surprised his girlfriend with a bouquet – that may seem uncommon but what made it special is that the bouquet is made up of five hundred- and one-thousand-peso bills. Vlogger Von Ordoña surprised his girlfriend Carlyn with a 1-million-peso money bouquet for her birthday and remarked, “Kahit ang isang milyong bulaklak, hindi kayang tumbasan ang pag mamahal ko sayo.

Who says that giving extravagant gifts these days is only limited to couples? Ivana Alawi, the famous vlogger recently gifted her mother, Mama Alawi, a one-million-peso gift for her birthday. Ivana did this by preparing ten cheques each worth P100,000 and placed it in a vineyard where her mom had to pick all the cheques and to her surprise it summed up to a million pesos. In their travel vlog video, Ivana revealed that her mother is not really materialistic, but the vlogger insisted on the gift still.

5. Pera o Bayong for the mother

Recently featured in Kapuso Mo Jessica Soho, a 67-year-old woman became a millionaire when her daughter gifted her the said amount along with a house and lot as her birthday present. Lou, said on the segment that she really wanted to make her mother an ‘instant millionaire’. She let her mother play a ‘Pera o Bayong’-like game where she let her choose her mother either a P100,000-peso cash or a peak at the ‘surprise’ gift. Aling Lolita, Lou’s mother chose the latter and to her surprise got the ‘gameshow jackpot’-like prize. Lou remarked as well that this really made her mother happy, and also noted about their humble beginnings.