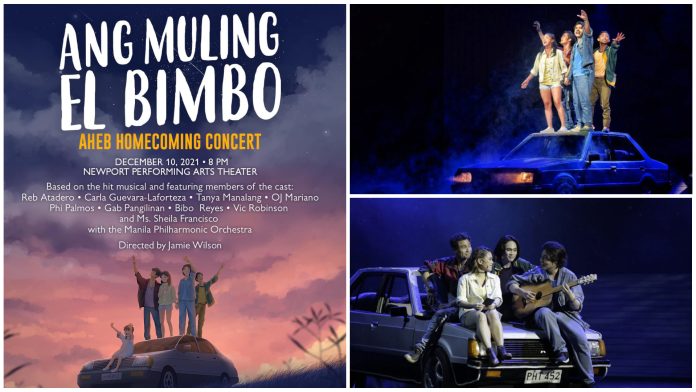 Theater Is Back! ‘Ang Huling El Bimbo’ Cast Returns to the Stage

Yes. We can now again sing this iconic line at the top of our lungs as Newport Performing Arts Theater at Resorts Worlds Manila in Pasay welcomes theater-goers with “Ang Muling El Bimbo”: AHEB Homecoming Concert.

Their first live concert after a long hiatus due to the pandemic will surely give us the feels again. And nothing beats a live performance more than any other.

Ang Huling El Bimbo is a musical featuring the songs of the most iconic 90’s band Eraserheads written by Dingdong Novenario. It gained quite the fame during the quarantine period as a recorded 2019 performance was streamed for free online on the official YouTube channel and Facebook page of ABS-CBN from May 8 to 9, 2020.

The songs, the acting, and the heart of that performance resonated to every Filipino watching and saved us somehow during the isolation.

A warm and touching story

It follows the story of three friends: Hector, Emman, and Anthony in a mini-reunion 20 years after their college graduation. A series of flashback scenes revealed their story one by one and all the challenges they faced to get where they are now. A story that unfolded through songs of Eraserheads that almost every Filipino if not all recognizes and memorized by heart.

For advertising inquiries, kindly directly email Sugbo.ph at [email protected].
Previous article
Getting to know the 3 Spider-Men in the Spiderverse
Next article
Cebu logs 9 new cases on November 21