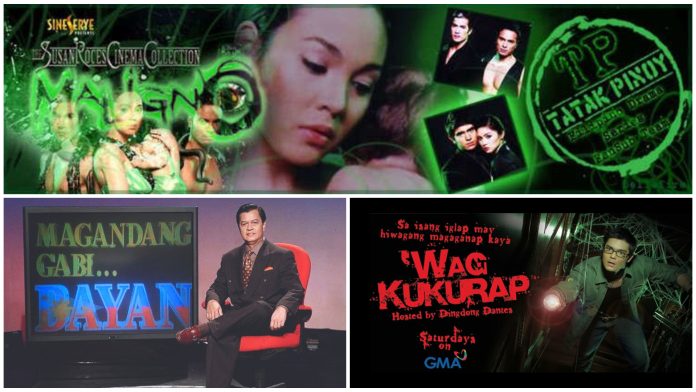 Top Pinoy Horror TV Shows that scared you as a child

Kids nowadays will never know how scared we were as a child after an episode of our favorite horror tv show.

Television today just don’t do these kinds of things anymore. It was the most thrilling part of our childhood and the generation today is clearly missing out on all the scares and traumas we’ve had.

Now, let me take you back and we’ll see if you can still remember your favorite stories from each show.

It’s probably the most recognizable and most awaited every “All Saints Day”. Noli De Castro’s classic flagship show “Magandang Gabi Bayan” only airs as a special but I’m pretty we haven’t missed a single year for it.

From the iconic “Magandang Gabi Bayan” line to the mind-boggling interviews and re-enactments. It was a family event in the couch/floor in front of the tv. The stories hits differently as it was being narrated by people who have experienced it and the unique storytelling that only Noli can bring. Remember that one where coffins followed someone around? Spooky.

With its storytelling being a mixture of horror and comedy, no wonder it was very loved. Portrayed by Agot Isidro, Rona Catacutan, a journalist is out to investigate and solve paranormal mysteries. It is also safe to say that she had Extra Sensory Perception or ESP.

The stories here were originally from the best-selling horror books Haunted Philippines and True Philippine Ghost Stories. This program was hosted by Dingdong Dantes in 2004.

The show presents real horror and paranormal stories with recounts by the victims’ interviews on the scary events that took place in the haunted venues. They are then re-enacted by actors and actresses based on the victims’ account of the spooky events.

It had three changes in hosts: first by Raymond Bagatsing, then by Jericho Rosales, and then by Hero Angeles. It’s a top-rated reality horror series that made our nights epic where it sparks personal experiences of the paranormal.

It was a show starring Oyo Boy Sotto who worked as a DJ/radio jock at night called New City Radio 95.5.

The DJ, together with his radio crew, helps his listeners and sets out solving unresolved deaths and other paranormal mysteries. It won local awards for best horror show and was said to be ahead of its time.

With it being very relatable because of its young cast, it was also praised for its unique storyline. All the eight teenagers have different supernatural powers which is a gamechanger. And let’s not forget the soundtrack of every 90’s kid Rivermaya’s “You’ll be Safe Here” which made it more popular.

A horror-drama serye led by Iza Calzado where it follows a beauty queen turned investigative journalist. Getting involved in a murder case of her boss and later on in a car accident where she lost her memory and started to see the spirits of the dead. And with the ghosts set on using her as their conduit to the mortal plane, her paranormal-filled life began.

There are two mini TV series that have been the unforgettable ones in the Sineserye Presents: The Susan Roces Cinema Collection.

Barbara and Ruth are half-sisters but one day Ruth killed herself in front of her only daughter. After that, strange things start to happen. Ruth believes that her husband will always love her sister and it was revealed that Ruth killed herself because of it.

To exact revenge on Barbara she haunts the house through the doll, Chelsea which was the star of our nightmares at that time. She hurts and kills everyone dear to Barbara until there was nobody left but Barbara.

Angela a successful newscaster was raped by a crazed man who suddenly disappeared. It was later on found that she was pregnant with the devil’s child itself.

A Satanic worship or cult was revealed to be in existence for years and treats Abgela’s son as the prince or next in line to the devil they worship. The unforgettable scene on this story was the revelation that almost everyone in Angela’s life was part of the cult.

I hope they would air the most spooky and memorable episodes again on tv just for old times sake. How about you? What were the most memorable story you’ve seen then?