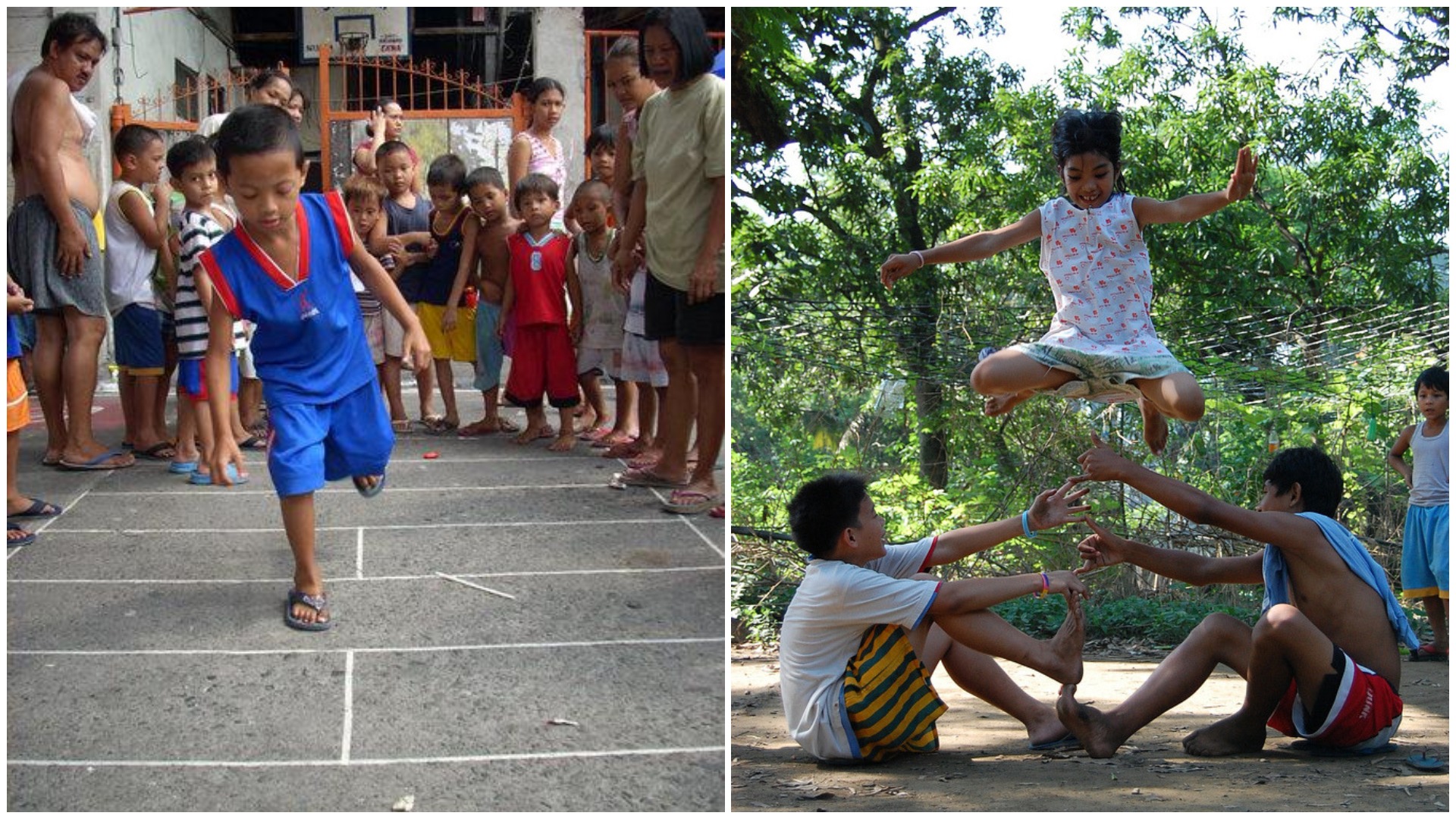 One of the popular childhood games among the boys, in this game two sticks, one flat and one short are involved. The short stick is either suspended with two pieces of stone (if the play area is made of cement or asphalt) or dirt (like in most provinces), just enough that the short stick can be flicked using the longer, flat stick. The other player would hit the short stick mid-air where the farther the distance it is thrown, the higher the points. Meanwhile, the opposing team would anticipate and catch the short stick to nullify the points and eventually take turns with the other team.

One of the games where our mothers would definitely be angry at us when we played it, luthang is definitely one of the more dangerous toys ever played when we were young. In this game, a hollow cylindrical piece of bamboo where one end is inserted with a wet piece of paper (the bullet), and the piston, usually made of the same bamboo stuffed with a wood is pushed rapidly at the other end. With air compressed, the bullet made of the wet piece of paper is pushed out with a pop.

In this game, female spiders (yes, live spiders) of various species of web weavers are pitted with another female spider on a stick. Both spiders will try to kill each other unless interrupted by the human handlers. Though very dangerous, kids from the past still play this game, having a collection of spiders of their own nestled in their decorative boxes.

Similar to the America’s hopscotch, this Philippine variation of the game involves of an illustration of six square formed into a cross, where an “ayan” or a stone is thrown to the cross determining the number of steps to be taken to finish the game. Players take turn and the first one to complete the sequence of steps in the cross without touching the rims formed will win the game.

Probably one of the most iconic Filipino childhood games, this game is also called ‘harangang taga’ or ‘tubigan’ in other areas in the country. In this game, players are grouped into two teams: an attack team and a defense team, with each team has up to five players. The attack team must try to run along the perpendicular lines from the home-base to the back-end, and return without being tagged by the defense players. The defending team are the ‘it’, and must stand on the designated lines and they can only move back and forth this line. The leader, however, usually in the first row, has the power to go to the middle perpendicular line, intersecting the other players’ lines making it harder for the attack players to accomplish their goal.

In this game, a small bouncy, rubber ball and a set of jacks or stones are required. To play this game, first, scatter the jacks onto the playing surface. Throw the ball into the air, pick one jack or stone, then let the ball bounce once and catch it. Do this repeatedly until all jacks or stones are collected. If the player fails to pick up the stone on time or the ball bounces twice, a foul is called, and the opposing player starts his turn to complete the set of stones or jacks. As the game progresses, in some places, further actions and signs are designed to make the game even harder.

Or roughly translated in English as “jump over the cow”, luksong baka is a game where one player crouches while the other players jump over them. After all players successfully jump over the ‘it’ or the crouching player, he/she will gradually change position to the point he/she is almost standing up. This makes it harder for the other players to jump over the it. This game is also a popular variation of another Filipino childhood game, luksong-tinik.

As what the famous vlogger Mimiyuuuh once said, “being a ‘mother’ in Chinese garter makes you a strong, independent woman”. Mostly played by girls, in this game, two people hold both ends of a stretched Chinese garter horizontally while other players attempt to cross over it. The goal of the game is to cross without having tripped the said garter, and by each round, the garter’s height is raised. The game has many rules and variations, including two teams compete where each team is led by the ‘mother’, or the player that can save the other team players who fail to cross the garter.

This game is generally played as many as ten players, divided into two teams. The objective of this game is to touch the home base of the opposing team without being tagged by the guards of the opposing team. Players can roam around the playing field, either to try to reach the base or catch the ‘bahaw’ opponents, where ‘bahaw’ is defined as those who let go of their home base the earliest.

Mostly played indoors, this board game has lived through many generations. Played using a wooden board with seven smaller holes on each side and two bigger holes on either side, and shells or stones, the premise of the game is to collect more shells or stones than your opponent. The most shells or stones collected wins, and sungka is a two-player game.