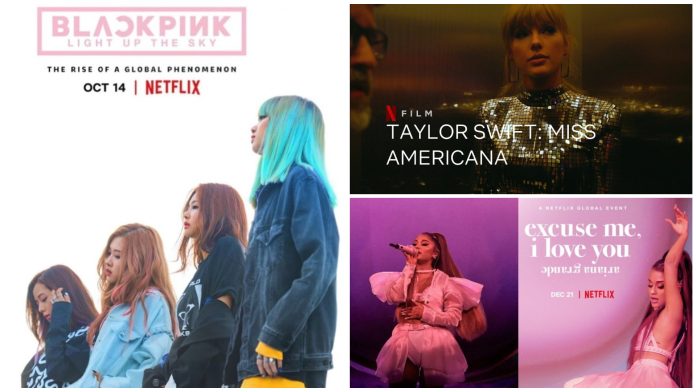 Best Musical Documentaries You Can Watch Right Now on Netflix

Sure, Netflix is great when it comes to streaming famous TV shows, movies, anime, K-drama and so much more. The streaming platform is also home to the best documentaries, some of them are self-produced, and that includes documentaries that tackle about music or any icons related. Here are the top musical documentaries that you can watch right now on Netflix Philippines:

BLACKPINK: Light Up the Sky

K-pop has really dominated the planet, and it cannot be denied that BLACKPINK are one of the forerunners of modern K-pop that the global audience truly embraced. In this documentary, BLACKPINK: Light Up the Sky focuses on the journey of South Korea’s top girl group, Blackpink; from their grueling and exhausting beginnings up to their sold-out concerts everywhere, Light Up the Sky tells the story of the four young girls, their journey and their insights about in life as K-pop idols.

Taylor Swift is indeed the GOAT, and her re-release of her hit albums years ago as a testament of ownership of her works just proves how far the once young country singer has come. While Miss American was released last year (2020), the documentary tackles the singer’s struggle and inner turmoil that she kept from the public. Through interviews, footages, home videos and more media, fans are given a peak of Taylor’s personal life, specifically her eating disorder called body dysmorphia which certainly affected her life.

Among this list, this is the only documentary that doesn’t directly focus on a single artist but rather probably one of the worst events that ever happened in the concert and festival-going industry. Focusing on the infamous failed 2017 Fyre Festival, which was billed as a luxury music experience on a posh private island but things end on a sour note. The film focuses on the events leading up to the failed event, the people involved as well as the consequences.

Ariana Grande: excuse me, i love you

Following the events of pop star Ariana Grande’s Sweetener World Tour in 2019, the concert documentary was released on December 2020, exactly one year after the tour’s conclusion. The concert film discusses the singer’s preparations for the tour, her personal insights, fan interactions, behind-the-scene happenings including choreography and many more. The documentary went on to be nominated for MTV Movie & TV Awards as “Best Music Documentary” last 2021.

Released in last 2017, the cinema verité-style documentary focuses on the hit artist and icon, Lady Gaga – her personal life, from meeting her fans, working on new music and personal struggles. The documentary’s timeline leads up to the creation of her fifth studio album, “Joanne”, and also includes her appearance in Super Bowl performance that year as well as in the horror anthology series, American Horror Stories.

Probably the most unique entry among this list, Bo Burnham: Inside was recorded in the guest house of his Los Angeles home during the COVID-19 pandemic without a crew or audience. Directed, written, edited, cinematography and music by Bo Burnham himself, the film features a variety of songs, sketches and stories about his day-to-day life indoors, as well as his deteriorating mental health. The documentary was well-received with 93% in Rotten Tomatoes.

Chronicling the famed singer’s struggles with anxiety and depression, the 2020 Netflix entry offers a peak of Shawn Mendes’ life in a much raw form. His journey towards stardom as well as his relationship with family, friends, fans and as well as his deep romance with fellow artist Camilla Cabello.

Almost everyone knows the conservatorship status of Britney Spears under the clutches of his father; Britney vs Spears focuses on her struggles under this arrangements up to her well-deserved freedom. In this documentary, journalist Jenny Eliscu and filmmaker Erin Lee Carr investigate Britney Spears’ fight for freedom by way of exclusive interviews and confidential evidence.