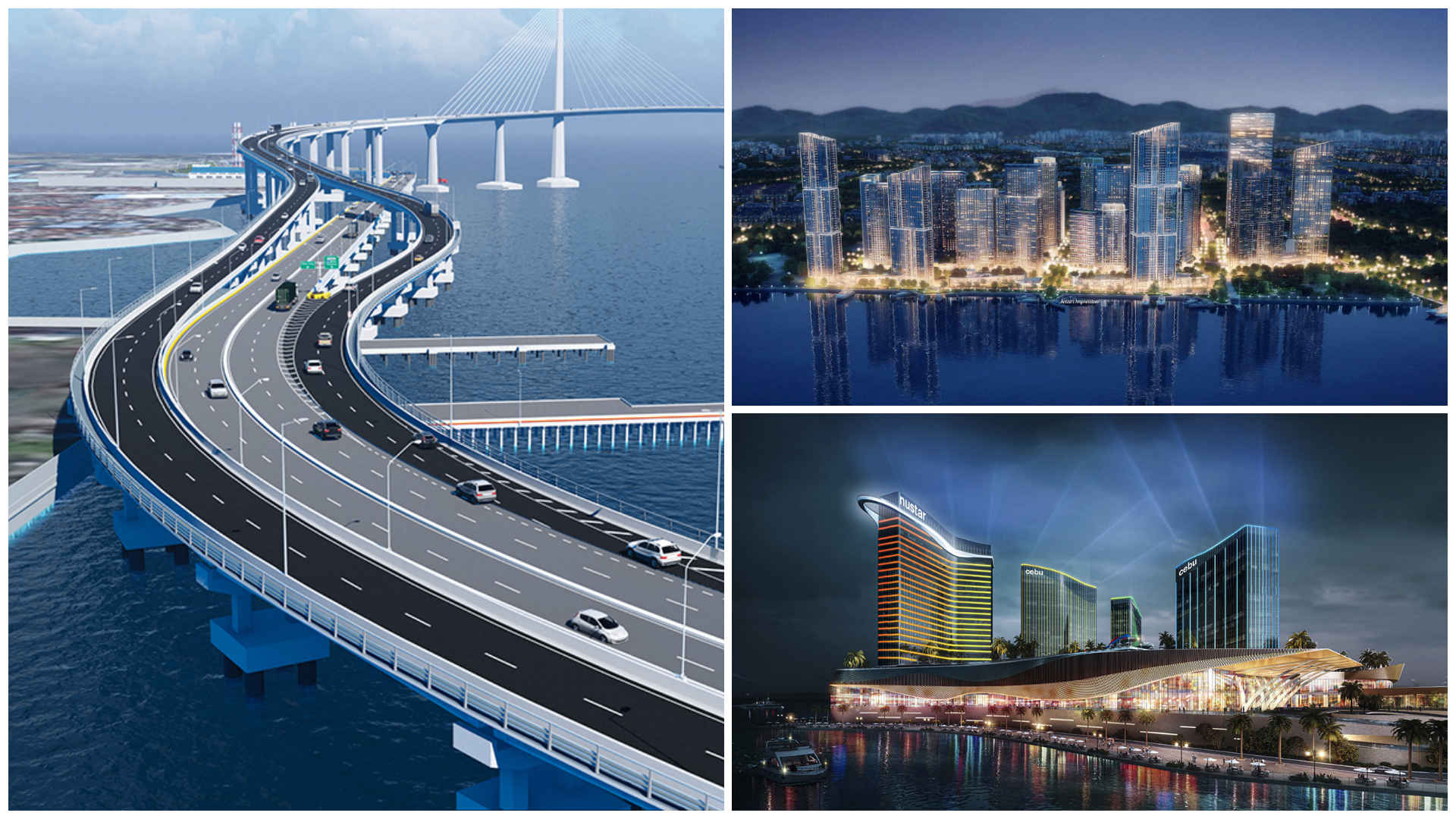 8 Multi-Billion projects that will transform Cebu

Cebu is truly the Philippines’ Queen City of the South.

As the country’s richest province for five consecutive years, there’s no stopping Cebu from being a world-class destination as it continues to attract big investors to build multi-billion projects.

Are you ready? Here are the eight (8) exciting multi-billion projects to rise in Cebu:

Isla dela Victoria, a 350,000 sqm world-class integrated development, is set to erect in the prime SRP – Cebu, Philippines which will include bars, restaurants, mall, convention center, casino, park, theatre, and no less than 3 hotels.

When the former Cebu City Mayor Tomas Osmeña lost the 2019 mayoral race, everyone thought this project wouldn’t be pushed through. To our surprise, now Cebu City Mayor Labella has given the project a go, approved and granted building permits of the Gokongwei-led Universal Hotels and Resorts, Inc. (UHRI).

From the initial plan of ₱18 billion, UHRI increases its investment to ₱25 billion for the project — the biggest project to date in the South Road Properties.

John Gokongwei, who is not just a self-made billionaire but also a fellow Cebuano, has agreed to invest on the ₱25 billion project in SRP Cebu — all at zero-cost to Cebu City. This is a 50-year lease of the land, Cebu City will own 10% of all profits made for the entire duration. After this, when the lease expires, the Cebu City Government will own not just 10%, but everything on the property.

The development’s name is dedicated to a Cebuano, Jojo dela Victoria, who died protecting our waters from dynamite fishermen. Isla dela Victoria will put the spotlight on SRP. It will be the hub for the ferries and cruise ships that will come, and the seaplane airline that is already there. It will be the shining beacon of the Visayas.

The highly anticipated Cebu Arena, which is officially named the Seaside Arena, will be finally realized after being presented by Mayor Edgar Labella during his 100 Days of Service speech on October 16, 2019.

The Seaside Arena will have a seating capacity of 16,000 (almost as large as Mall of Asia Arena in Manila). It is eyed to become the prime venue for large events such as major local & international concerts, sports events, international conventions, among others.

The SM-Ayala Consortium will pour a total investment of P307.2 billion for the 26-hectare Seaside Arena, which will be constructed in SRP beside the SM Seaside Complex. It is expected to generate 2 million new jobs in years at full development, with target completion in 2025.

As of August 2020, the construction of the 8.5-kilometer Cebu-Cordova Link Expressway (CCLEX) is halfway through for its 2021 completion target date.

The P30-billion project, which will beef up Cebu’s road network to provide motorists safe and comfortable travel experience, is expected to help spur economic growth and boost investments not just in Cebu City and Cordova Municipality, but also in the entire Cebu Province and the Visayas region.

Among the iconic features of CCLEX, which is envisioned to be among the landmarks in Cebu when finished in 2021, is a lighted cross on all four sides on top of the two 145-meter tall main pylons.

CCLEX will have two lanes in each direction and covers the on and off ramps connection along the CSCR, the main navigation span twin pylon cable-stayed bridge, viaduct approach bridges in Cebu City and Cordova sides, causeway, toll plaza and an at-grade road connecting to the Mactan Circumferential Road.

The span and height of the bridge, which is at 51 meters, will allow large vessels to pass underneath and the link is expected to serve at least 50,000 vehicles daily.

One of the highly anticipated road projects will finally come to realize. Approximately 73.75-km long, the Metro Cebu Expressway (Cebu Circumferential Road) is said to meet Metro Cebu’s existing and future traffic demand. It is expected to be completed by 2022.

Identified as priority project of President Duterte’s “Build, Build, Build!” project, the proposed Cebu Circumferential Road, based on the FS report of DPWH Region VII consultant, is a South to North Bypass Road along the hills of Metro Cebu and is divided into three (3) segments.

The stationing and the corresponding lengths of each station is shown below:

Are you ready for the new “Las Vegas of Cebu”?

Sprawling on a 13.5-heactare site in Punta Engaño in Mactan, the Emerald Bay Mactan Resort and Casino is the first large-scale, gaming-anchored hospitality development outside the Philippines capital, Manila.

Davao-based businessman Dennis Uy, the President of PH Resorts Group Holdings, the gaming and tourism holding company of the Udenna Group, has fast-tracked the completion of its new casino resort’s first phase by the end of 2021.

The development will also include themed retail outlets, an activity centre and extensive food and beverage offerings, all in a beach resort setting.

The Municipality of Cordova in the island of Mactan is being groomed to be the ‘Sentosa’ of Cebu.

Sentosa is an island resort off Singapore’s southern coast popularly known as the state of fun. Just like Sentosa, Cordova will be positioned as the “crown jewel” of tourism and business in Metro Cebu.

The 1,500-hectare reclamation in Cordova will be developed into an integrated ‘world-class lifestyle’ destination featuring a cruise terminal, marina, beach, eco-parks, golf course, churches, retail centers, civic centers, cultural centers, and promenades with inland transportation consisting of buses and a train with a railroad.

Targeted to be completed by 2028, this multi-billion project will compose four artificially-made islands.

Home of the first world-class theme park in Cebu, the town of Minglanilla in southern Cebu has attracted a major investor to construct a ₱6-billion reclamation project envisioned to modernize the landscape of Minglanilla.

On July 22, 2020, the Department of Environment and Natural Resources (DENR) has issued an environmental compliance certificate to the 100-hectare Ming-Mori Techno Business Park in Cebu.

This world-class estate which envisions to provide 75,000 jobs is a joint venture between the local government of Minglanilla and private consortium partners Ming-Mori Development Corp. (MMDC), an affiliate of publicly listed CLI.

Mayor Elanito Peña of Minglanilla said, “the grant of the ECC has brought us closer to the materialization of the reclamation project which will propel the municipality of Minglanilla to higher heights and cements its role as a major economic player in the province of Cebu”.

Mandani Bay is a P130B waterfront expansion along Mactan channel in Mandaue City and stretches a gross land area of 20 hectares. It is designed to transform Cebu into a worldly acclaimed lifestyle destination and to serve as a focal landmark in the area.

This master-planned property will have 21 towers that will include residential condominiums, office towers, retail areas, a hotel and condotel, and expansive lifestyle spaces.

The project is subdivided into 8 blocks/phases and is expected to add 10,000 units to Cebu’s condominium inventory upon completion in 10 years from the initial 12 to 15-year timeline. Its first phase was launched May 2016.