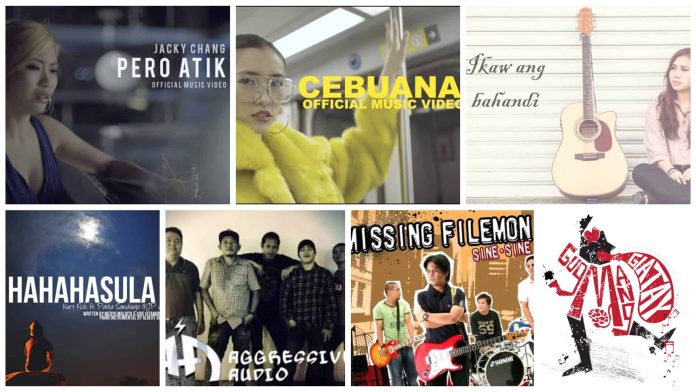 Here is a list of the iconic songs that took over Cebu and made a huge impact in our lives. The songs we cannot help but sing along to, from the nostalgic BisRock to the rising VisPop songs.

This can either be a test, a trip down memory lane or a learning to all our readers. Let me take you to the journey through these “Cebuano songs”.

Titled “lingin” or circle, it is one of the most remembered songs of all time for the Cebuanos. This song represents both humor and creativity. Imagining a circle house, a circle knife, a circle nose and the list goes on will surely put a smile in your circle mouth. It touches the obvious circles, the imaginary, and the deep, how our life is a circle and that we are all circles.

A love song for a broken heart combined with a little rock. It was very famous that it has its own tagalog version entitled “Kahit Na”. Roughly translated the title is “Even if/ Even though”. It was the start of an era of BisRock. Everyone was singing it relating to a love lost and the pain of loving them still.

This song is a shout out to everyone who is tired of life in general. Taken in the point of view of a student who sees being a celebrity as the solution. The song went from the decision to be an actor to people being actors in real life. It’s a song that allows people to air out their frustrations by singing it.

Roughly translated, it means “Damn Love/Damned Love”. It’s a love letter to a girl, raw, simple and straight forward. It represents everyone who has been a victim of the feeling.

A song of a found love. The song is full of metaphorically presented lines. It is a vow to that “you”.

A certain someone that seems to be everything in your life. This is a mellow song that was a break from its bisrock predecessors.

From its chill acoustic strumming, down to the whistling, this one is definitely a “feel good song”. It makes us sway and stay calm. Everyone’s got this song’s melody stuck in their heads. Balay ni Mayang or “House of Mayang” was like a combination of folk songs, acoustic and pop.

The rise of VisPop was unstoppable. This song in particular was sang in all corners of Cebu. Featured in television and radios, the song was that relatable. The struggles of an unrequited love, a hidden one at that. The story of almost everyone. The illogical reasoning, actions, and worse, illogical feelings that is so absurd and comical one can only laugh. Hence, the HAHAHA.

Usually, couples become healthier and gain weight the longer they are together. They say that this indicates that the relationship is healthy and strong. The song kind of explains the “how”, with inserting Cebu delicacies and the tempting delicious foods. A song of love that is abundant, healthy and big.

The ultimate “hugot” song. Each line of this song contains a certain punch to every person trying to move on. The “assuming” and “pinaasa” hearts had this as an anthem. It talks of finally giving up, of being sick of it but then takes it back again. Story of our lives.

A YouTube hit with more than 14 million views. This pop song which is a mix of Cebuano and English have made the Cebuano language extend its reach internationally. Either you understand the lyrics or not, the upbeat song will make you dance to its beat.