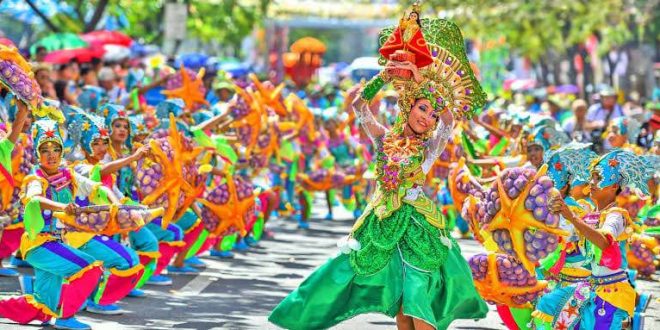 Cebu’s Sinulog: The Grandest Festival in the Philippines

Millions of tourists visit Cebu each year. The island of Cebu has become a premier destination whether it be for work, study, travel. But there’s a certain time of the year that everyone is excited about, when people from around the world and from across the country gather together with the Cebuanos to celebrate a certain festivity – the Sinulog.

Here are some facts you need to know about Cebu’s Sinulog.

When is Sinulog celebrated?

Held every third Sunday of the January, the Sinulog Festival is one of the most famous festivals in the Philippines. (For this year, it is celebrated on January 20, 2019.) It is attended, not only by Filipinos, but people coming from different parts of the globe also came to witness the celebration.

From the colorful costumes, to the distinctly beautiful dances and to the music of the drums and trumpets, the Sinulog Festival is unchallenged in its grandness and thus earned its name – the “The Mother of All Festivals”.

Why do we celebrate Sinulog?

The Sinulog Festival is a celebration in honor of Santo Niño (Child Jesus). The festival is done by a dance ritual, in which it tells the story of the Filipino people The word “Sinulog” means a graceful dance– a rhythmic and beautiful forward and backward motion that represents the “sulog” (or current).

The Sinulog Festival has been going around for almost four centuries now. Its rich history dates back to old and truly reflects the humble beginnings of Cebu and the birth and growth of Christianity in Cebu and the Philippines.

How long is it celebrated? What are the activities?

The Sinulog Festival fever goes on just after New Year’s celebration and has become a month long tradition in Cebu. The most-awaited event is the  Sinulog Grand Parade which is in the culmination of the Festivity. Among the many other activities during the festivity are contests, as art exhibits, beauty pageants, photo contests, and singing and dancing contests. The street celebration is also something to look forward to. Participants may also join the festival’s activities, such as concerts, cultural shows, fireworks display, fun runs, and street fairs.

What’s really the history of Sinulog? Why in Cebu?

Historical accounts say that before Portuguese navigator Ferdinand Magellan came to Cebu on April 7, 1521 to plant the cross on its shore and claim the country for the King of Spain, Sinulog was already danced by the natives in honor of their wooden idols and anitos. Then Magellan came and introduced Christianity. He gave the Santo Nino (image of the Child Jesus) as baptismal gift to Hara Amihan, wife of Cebu’s Rajah Humabon who was later named Queen Juana. At that time, not only the rulers were baptized but also about 800 of their subjects. Unfortunately, however, shortly after the conversion, Magellan went into a reckless adventure by fighting the reigning ruler of Mactan, Rajah Lapulapu, with only a handful of men. He died in the encounter. That was on April 27, 1521.

The remnants of Magellan’s men were however able to return to Spain to report the incident and the possibility of conquest. It took 44 years before a new group came and started the formal Christianization of the islands. Miguel Lopez de Legaspi arrived in Cebu on April 28, 1565. His ships bombarded the village and in one of the burning huts, one of his soldiers named Juan Camus found inside a wooden box the image of the Santo Nino lying side by side with native idols.

Historians now say that during the 44 years between the coming of Magellan and Legaspi, the natives continued to dance the Sinulog. This time however, they danced it no longer to worship their native idols but a sign of reverence to the Santo Nino which is now enshrined at the San Agustin Church ( renamed Basilica Minore del Santo Nino). Of course, through the years since 1521, the dance was a small ritual danced by a few in front of wooden idols or before the Santo Nino. In fact, at the Santo Nino Church where the image is consecrated, only the candle vendors could be seen dancing the Sinulog and making offerings. During the Santo Nino fiesta which falls on the third Sunday of January, children dressed moro-moro costumes also dance the Sinulog. This was really no big event for Cebu City.

Read more of the history on its official website here: https://sinulog.ph/history-of-sinulog/

The Sinulog Festival reflects how rich the history of Cebu is, how lively and kind its people are and how blessed in many aspects it is. The festivity became a way of sharing the Cebuano culture to the world.