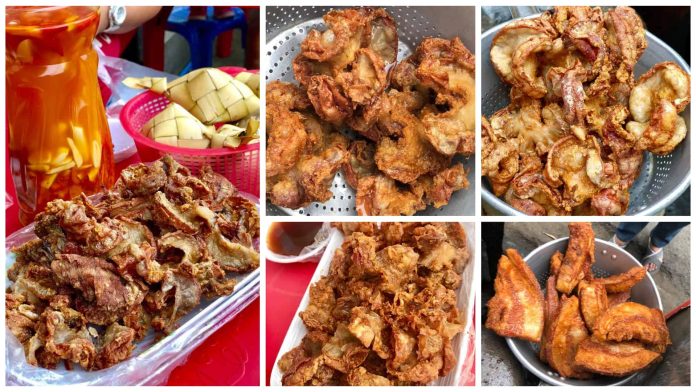 If there is one street food that’s very popular in Pardo, it surely is the distinct Ginabot. There’s just something in their ginabot that people from the city – or even from northern or southern parts of Cebu – would intentionally stopover to fix their cravings. Ginabot sa Pardo is crispy, flavorful and perfectly seasoned — once tasted, always wanted.

This crispy dish is Cebu’s take on chicharon bulaklak or pork crackling. Most of the time best paired with puso (hanging rice) and cold Sparkle or Mountain Dew. However, it is a street food that should be taken in moderation. Ginabot is made of pork intestines that are dried and salted before being deep-fried until they are golden brown.

Things you need to know

• Operating hours: There’s no exact time but they usually cook at 9AM for brunch and 4PM for late snacks daily (including Sundays). And most of the time, they run out of ginabot in 30 minutes to an hour after cooking, since they only cook 100pcs in a day. They also have other food like adobo.

• NOTE: The schedule for cooking ginabot is sometimes unpredictable, which makes it exciting in a way. There are days they cook ginabot earlier or later or even not at all. Don’t fret, as there’s a lot of food stations in the area. Just ask around.

Ride any jeepney going to Pardo/Bulacao. Either ride (1) a 10H jeepney from the SM City Cebu PUJ Terminal, or (2) a 12L jeepney from the Ayala PUJ Terminal, then another jeepney going to Tabunok or Minglanilla. Inform the driver to drop you off at Pardo Church. Cross the street via the sky walk, and you will immediately find the public market. Walk for another 1-2 minutes going a little further, at the back of the market where you can see Three Sixty Pharmacy.

Parking: If you’re driving your own car, you can park at Pardo Church and walk from there. Cross the street via the sky walk.